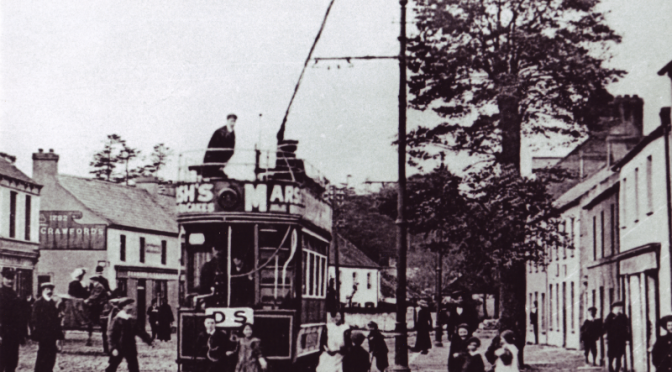 ‘Passengers can take Small Dogs (at owner’s risk) on outside of trams, at a charge of 1d each dog per journey.’ (1909 timetable)

The electric tram came to Douglas in 1898, running through the city centre and beyond to Blackpool. It wasn’t the first tram in Cork, but the horse-drawn trams of the Cork Tramway Company ran for just 3 years in the 1870s. Thirty-five electric tramcars operated on three cross-city routes: Blackpool-Douglas, Summerhill-Sunday’s Well, Tivoli-Blackrock. The tram terminated in Douglas village, turning around on a track loop just before the RIC station.1 A short-lived single line continued further down the road, and this line gave ‘Tramway’ to this terrace. The service ran seven days a week, from 7.30am to 11pm, at 10 minute intervals. Fares ranged from 1 to 2 pence, depending on the length of a journey. An agricultural labourer in the late 19th century could earn 7s to 9s a week, if he worked full-time.2 The fare was therefore cheap enough to appeal to many earning low wages. However, it was not used by the poorer members of society for daily commuting, but for leisure. In the late 19th century, prices fell while wages remained stable, so that even poorer workers had increased buying power. Many enjoyed a higher standard of living and part of that lifestyle was increased leisure. The popularity of organised field sports, such as Gaelic games, in the 19th century was partly due to this new economic situation.

Sunday was the most important leisure day of the week and the trams facilitated city-wide trips by workers on their day off. Trams on the Sunday schedule ran as frequently as during the week, showing the demand for leisure travel. The tram to Blackrock was a particularly popular Sunday trip, with city dwellers travelling to the ‘poor man’s seaside’ in the small fishing village. The annual regatta on the Marina attracted large crowds, many of whom travelled there by tram. Douglas was also popular with Sunday tourists, who escaped the grime of the inner city for a day, to admire the estuary and stroll alongside the Tramore River. Douglas village was truly rural at this time, as the unpaved, muddy street in the photograph shows. It was such a popular destination that Miss Mary Reeves of Tramore House worried about the many people who came to Douglas on the tram finishing their journey in one of the village’s many public houses. She built a café in the village, which provided alcohol-free refreshments, so that the values of Temperance extolled by Cork’s favourite priest, Fr Mathew, could be upheld. But the rural village was not the only attraction for tram travellers. A seat on the upper deck gave passengers a view over the high walls of the villas and country seats on the Douglas Road, allowing the poor of Cork to see just how the other half lived.

Trams faced increased competition from buses and bicycles in the 1920s and the company’s profitability declined. The last trams to Douglas ran in 1931.