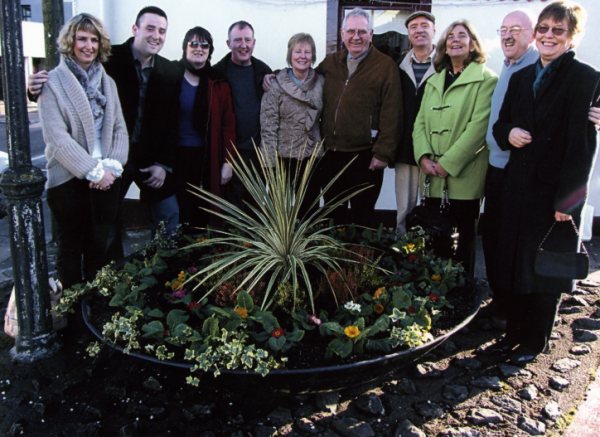 In our previous newsletters we said that we would keep the people of Douglas informed as to the current activities and plans for the future.

Our first matter to report on is the results of the Tidy Towns competition of 2009.

We received the results of the competition a few days ago, and we are very pleased to see that we have increased our marks by 12, approximately 5% increase on last year.

Considering the major construction work that has been going on in the Village and the consequent disruption, we feel this is a very satisfactory result. Another negative factor of course which militated against our Tidy Towns group was the lack of support from the County Council and the huge cutbacks in cleaning, road maintenance, removing of weeds and trimming and controlling grass and hedges.

Despite these disadvantages we were commended by the judges who said “There is a great commitment and evidence from people who give up some of their spare time to attend the weekly meetings”.

The marks were broken down over several headings, and under the heading of Built Environment, the judges remarks were “Ulster Bank, East Village Bar & Restaurant and McDonalds, are impressive, some spectacular and new buildings are EBS, Amacus Cafe and Mischief Makers, and the Nakon Thai and Veterinary Animal Clinic are admired”,. The judge also commented that St. Columbas church is very well maintained, bright and fresh, and Douglas Scouts Centre and St. Lukes spacious school were also admired.

In a further comment the judge said “The Anglican church looks supreme with great landscaping, and it sported a wonderful cut stone entrance and wrought iron gates”.

There was also a positive comment for the A.I.B. Bank, and as a general comment the judge noted that there are many other well kept shops and offices.

Under the heading of landscaping, there was strong praise for the car parking area at the Ulster Bank, and of course the Fingerpost Roundabout was highly commended, and the judge was also very impressed with the spectacular traditional stone walls that surround the graveyards. The Church of Ireland graveyard was beautiful, but the one at the other side looked a bit shabby”.

There was also some criticism of the fact that the graveyard is not well policed from the point of view of litter control, and the judge noted that a few feet away from the “No dumping please” sign, rubbish was dumped. This is a continuous problem because of County Council cutbacks.

As many people know, the Tidy Towns have been constant in its endeavours to improve the tubs and shrubbery in the Douglas area, and we were delighted to receive the comment “There were several impressive splashes of landscaping which gave fresh and crisp appearance”. The new large planter box at Lalquila was spectacular.

We were also applauded for our work on wildlife and natural amenities, and the spacious public park was noted as a great amenity, and the judge commented that it was well kept with fine trees and good seating. In particular the spacious childrens’ playground was noted as a wonderful facility, and this is something that the Tidy Towns and the Community Association are immensely proud of and grateful for the support provided by the Cork County Council in renewing and refurbishing it in 2009.

We were commended on litter control, but there were a number of areas which were shown to reflect adversely on our work, and the lack of a continuous program of servicing of the litter bins in the main areas of the villages, was certainly extremely detrimental, and we would hope to discuss this further with both Councils.

We were particularly commended on our approach to waste minimisation, and the fact that we segregate cans and bottles from general waste on our Saturday morning cleanups, and it was strongly suggested that we might encourage businesses to clear litter black spots. The judge also inspected the Bring Centre, and noted that it was clean, neat and tidy.

I mentioned earlier that we have a problem with the lack of control of weeds, and I quote “a lot of weeds on the footpath were noted”.

The judges also commented adversely on graffiti on signposts, and of course did make the comment “the ongoing works at Tesco and other building sites, marred the areas”.

Residential areas – under this heading the judges were complimentary. Douglas Lawn, Shamrock Lawn, Grattan Park, and Marlborough Estate as well as Reeves Wood, which were well kept and in fact went on to say that the above are merely listed as examples of the numerous estates around the town which were well kept, and there is an array of wonderful houses in the Douglas area which have spectacular lawns, hedges, trees, flowers and shrubs. The report also noted that “roadside fencing is excellent with some fantastic stone walls”.

These stone walls are something the Tidy Towns and Community Association are very conscious of, and we are extremely anxious in our five year plan, that we can build in some funding to have these improved, and where they are threatened, that they would be protected, and we would hope that the Councils would work with us on these projects.

Finally under the heading of general impression, the judge commented “you are making a determined effort to maintain and improve your area. The planning of Douglas is impressive with the old blending in well with new developments”.

As we said at the start we have increased our marks this year, and we are already beginning to work to build on that, and we target another increase for the year 2010, and we would ask for the support of the people in Douglas, particularly the business and commercial people in Douglas, to work with us to make Douglas better, and particularly with the lack of Council funding, to be aware of the need to remove litter, weeds, dirt and graffiti, wherever they are found.

Cutbacks in funding of public authorities.

The lack of funding to the County Council and City Council has had an enormous effect on Douglas, all of it adverse.

Given the lack of funding, the Council is unable to maintain any proper cleaning facilities or removal of litter and servicing of litter bins, with a very detrimental effect on all aspects of Douglas Village. We understand the Councils’ difficulties and we are hoping to work with them so see what areas can be focused on, so that the impact will be lessened as far a possible, and of course as a Tidy Towns committee we are taking on more work ourselves, and in fact we have had work undertaken by contractors and others, to improve some of the hedging and the walk and on the footpaths in Douglas, and also we have undertaken spraying of weeds on all the kerbing in the Douglas area.

We are especially heartened that we have grown our hardworking team of volunteers, and every Saturday morning additional people have now joined us to work in keeping Douglas as litter free as possible, even if it is only for the weekend.

Further we are particularly indebted to Supervalu Grange, who have supported us with enthusiastic and able young staff who have worked with us every Saturday, and not only are they a credit to themselves and to Supervalu, they are a joy to work with and their enthusiasm and commitment to Douglas and to the environment is infectious.

We are now working on our 5 year plan, with focus of course on making sure that we have a detailed plan for 2010. We are also reaching out to the schools in the area and hoping that they would become more involved, and that that school children will understand the purpose of the Tidy Towns and the need to have such a group active and visible in the community. We know that the schools are indeed planning some projects over the next 9 months, and we will report further on those.

For those who wish to assist us, you can come to the Community Centre every Saturday morning between 10.30am and 12 noon, you can phone us on 021 – 4894955 (if there is no person in the office please leave a message with your name and phone number), and you can e-mail us at